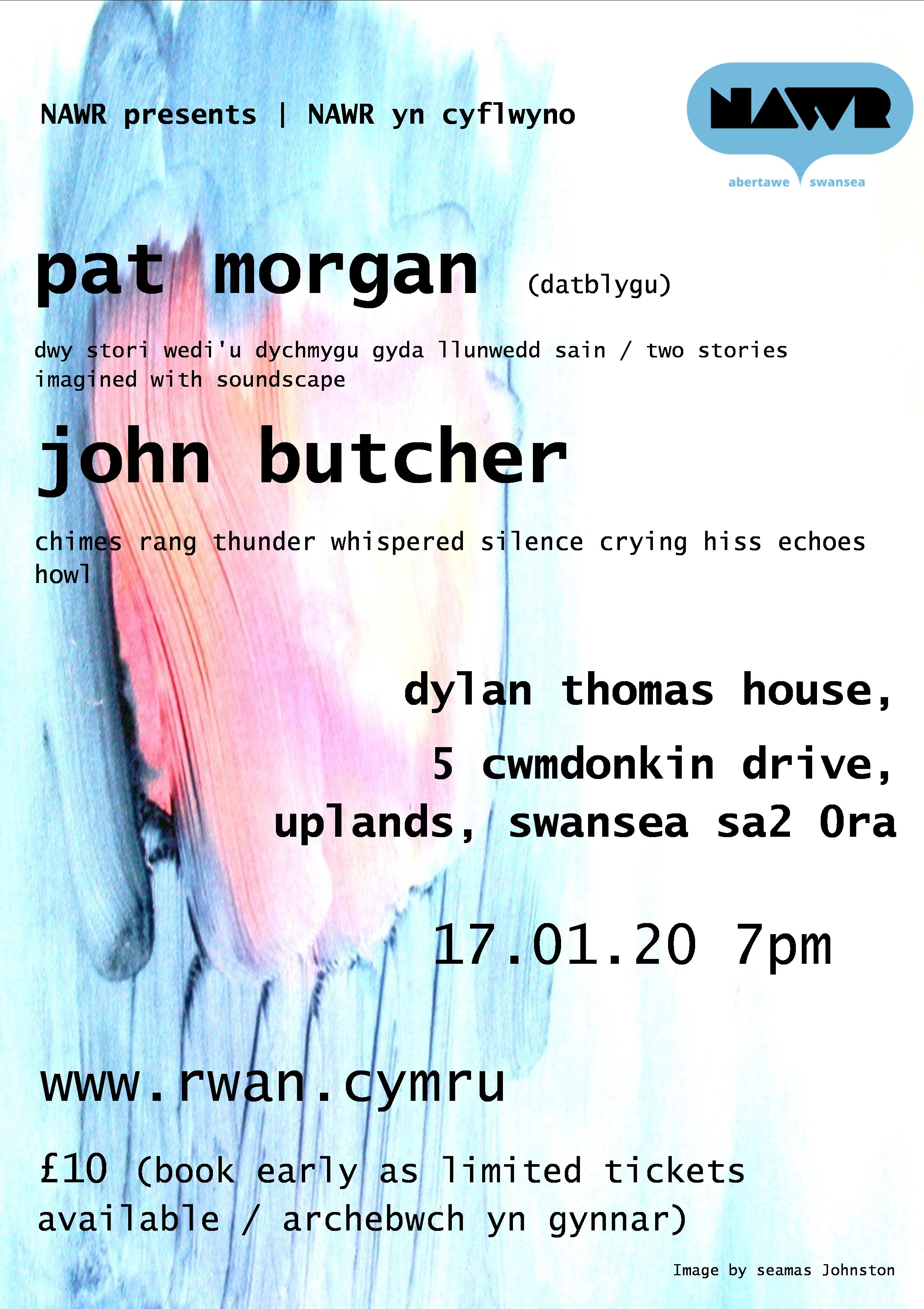 Brought up in Carmarthenshire, where music made a major impact. From an early age, piano, organ and TV theme tunes formed her musical taste which developed into a deep respect for electronica and bass guitar . Her music has mostly been a platform for the lyrics of David R Edwards in Datblygu. More recently, she has been involved in experimental improvisatory works; performing in NAWR, supporting Gwenno and Canolfan Hamdden.
On this occasion, the words of Dylan Thomas will form the basis for the musical accompaniment .

Butcher is well known as a saxophonist who attempts to engage with the uniqueness of time and place. His music ranges through improvisation, his own compositions, multitracked pieces and explorations with feedback and unusual acoustics.

His well received “Resonant Spaces” CD is a collection of site-specific performances recorded during a tour of unusual locations in Scotland and the Orkney Islands.

Recent compositions include “Penny Wands” for Futurist Intonarumori, two HCMF commissions for his own groups, “Good Liquor…” for the London Sinfonietta and “Tarab Cuts”, a response to recordings of early Arabic classical music which was shortlisted for a British Composer’s Award.

English saxophonist John Butcher may be among the world’s most influential musicians, operating at the cutting-edge of improvisatory practice since the ‘80s. Whenever an acoustic musician starts to sound like a bank of oscillators, a tropical forest, a brook or an insect factory, Butcher’s influence is likely nearby.

John Butcher is without question the most jaw-dropping technician we’ve ever heard wielding a tenor, equally capable of brawny assault and textural meditations at the very edge of audibility. What makes him so compelling, though, is the taste and poetry behind everything he does.”

“Extraordinarily powerful, Butcher’s soprano may test the limits of one’s ear to make sense of the close and complex relationships that are put forth, but there’s an undeniable emotional depth and sheer beauty in his work that supersedes technicality and concept.”

"It was one of the most shocking performances I've ever seen in my life. There's this absolute balance between total commitment to the sound that he's making and openness to anything that could happen. He's taking this instrument that has limitations and forcing it into those places where he is in direct negotiation with those limitations. It was one the best concerts I've ever seen. Totally crushing."