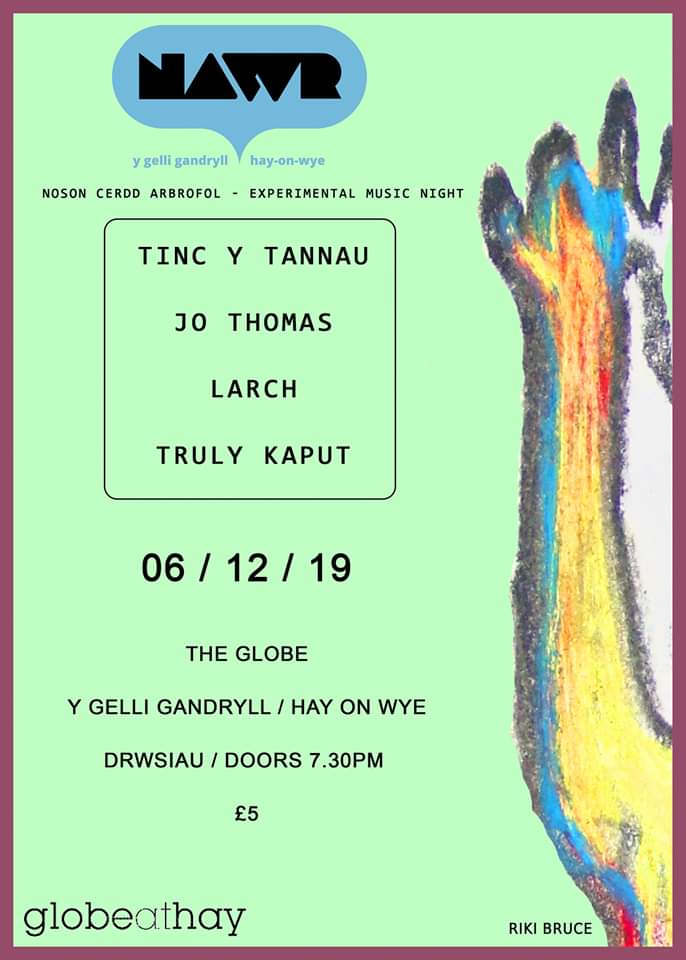 Sianed Jones and Ailsa Mair Hughes sing and play the Bass Viola da Gamba at the same time. Together they conjure up rich four part harmonies and rhythms that are intoxicating on these ancient
resonant instruments that can be bowed or strummed like a guitar. Tinc y Tannau perform playful improvisations, original songs, 16th century voice and viol pieces and unusual settings of ancient Welsh poetry. The ancient influencing the now whilst careering joyfully into the future.

Jo Thomas is a composer of electronic music, based in London. Her music has been released by Holiday Records (Mermaids 2013) the left field label Entr’acte and the contemporary music label NMC, as well as studio productions she performs live and site-specific works. Jo Thomas’s work has been performed at Tate Modern, the Queen Elizabeth Hall, London, Prix Ars, Linz, Salon de Messian, Radio
France, Paris, Huddersfield Contemporary Music Festival. She lives in North London and has her own studio in Highbury.

Started in 2017 as an attempt to stave off a descent in to drug addled madness, and to create some sense of purpose, Larch is the coming together of Kai and Matt. The duo, between long spells of hypnogogic indifference, made ‘Unknown Neural Pathways’ (March 2018) their first EP, a sprawling set of jarring nightmare-scapes, addressing the need for humanity in an automated world. Since that time the duo composed a live set, ‘Modulated in Savage Discord’; a piece which tried to put Europe’s imperial past into stark focus. In late 2018, they were commissioned to make the sound piece, ‘Stillness; Despair. Movement; Despair!’ at the Maiden Art Exhibition in Cardiff. Larch have now produced and released the beautiful and nauseating EP, ‘The World is Dangerous; Go Outside’ which explores the struggle for self-actualisation in a decaying world.

Described as "the best songwriter you've never heard of" and "an ear-splitting, nerve-shredding experience," transgender vocal-terror from Townhill Truly Kaput started making music as part of the queercore and feminist DIY punk scenes of London in the early 00's.
After playing with bands such as The Battys and Gender Fascist, Truly has since gone solo with their own brand of banjo-ukulele driven anti-folk. They are currently working on a new release titled Council House Classics.