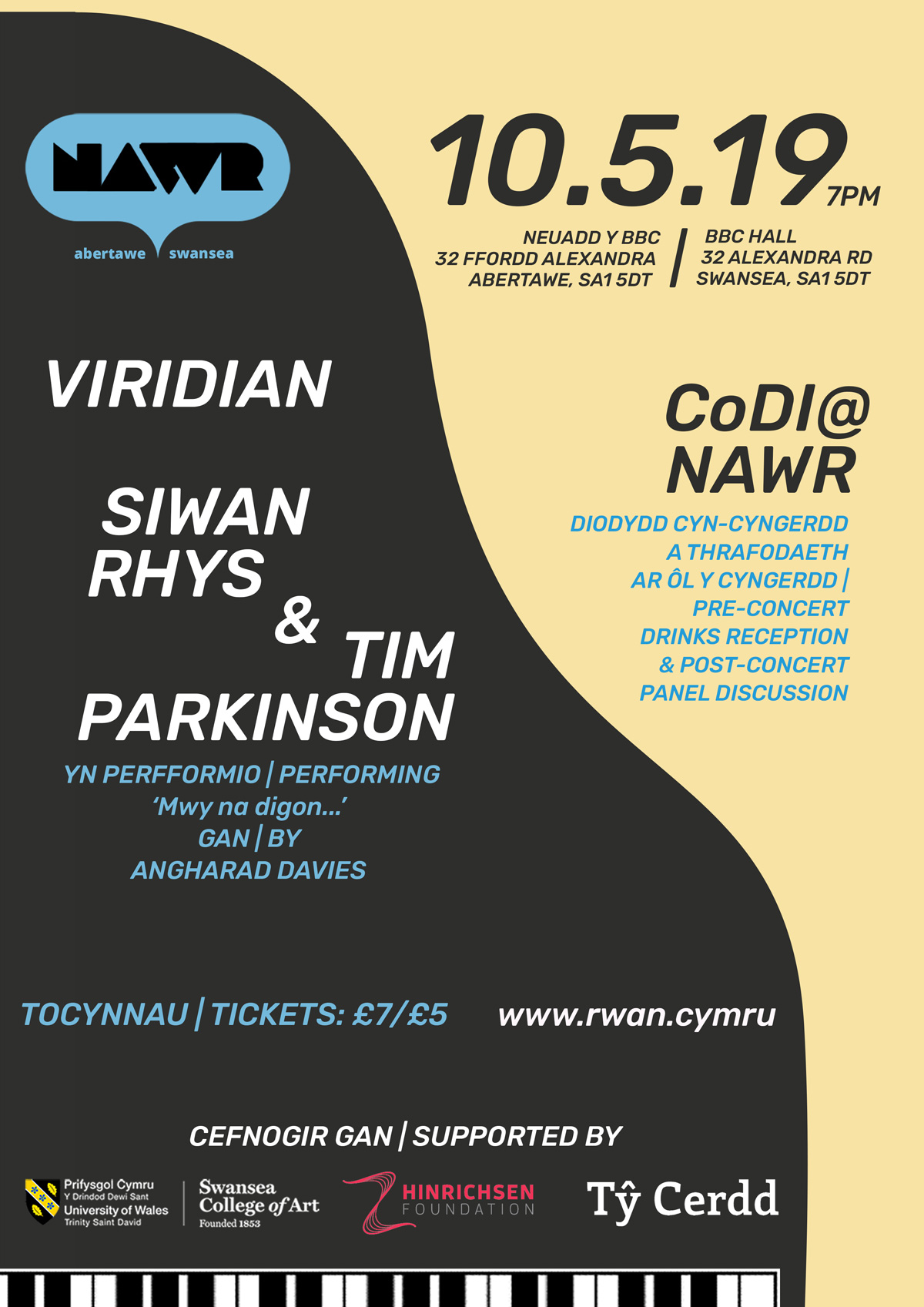 Viridian are an ethereal blend of image, voice, cello and double bass which re-imagines folkloric forms and tropes of femininity.
Improvisation of both sound and image (digital & analogue) produce a dialogic blend of textural depths.
Dissociative states, keening, and the supernatural inspirit the ensemble; each performance evokes utterances, nonsensical languages, and trans species forms of communication through collective rhythm, tone and resonance.
Our ensemble plays with improvisational visuals as the score. For radio broadcasts we have performed live experimental improvisation sets.

Siwan Rhys and Tim Parkinson will perform a specially commissioned piece for NAWR called ‘Mwy na digon…’ for one piano and two pianists by violinist and composer Angharad Davies.
Using the philosophy of permaculture as a starting point this piece will explore ways in which to convey some of its principles into a written score.
Angharad Davies is a violinist working with free-improvisation, composition and performance. Her approach to sound involves attentive listening and exploration beyond the sonic confines of her instrument, her classical training and performance expectation.
http://www.angharaddavies.com/

The commission and this event are supported by the Hinrichsen Foundation, Tŷ Cerdd & Swansea College of Art UWTSD.

Welsh pianist Siwan Rhys enjoys a varied career of solo, chamber, and ensemble playing, with a strong focus on contemporary music and collaboration with composers. She has played at prestigious British venues such as the Barbican Hall, Wigmore Hall, Royal Festival Hall, St David's Hall, Symphony Hall, and as part of the BBC Proms and Aldeburgh Festival. She has also performed in more alternative concert settings with initiatives such as Nonclassical, Live Music Now, and Multi-Story, and has recorded many times for television and radio and for labels NMC and Prima Facie.
https://www.siwanrhys.co.uk

Tim Parkinson is well known for his compositional work and he is also active as a pianist and curator and has performed with Apartment House, Plus-Minus, and in venues such as Tate Modern, Barbican, Huddersfield Contemporary Music Festival and Tectonics.
http://www.untitledwebsite.com/life/